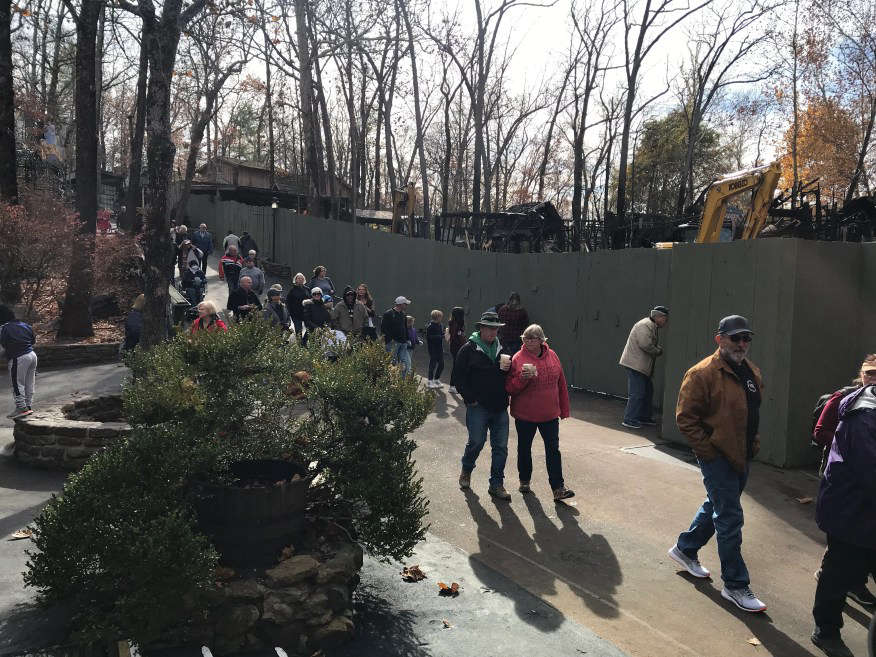 Guest walk by the fence built at Silver Dollar City around the area that caught fire on Thursday. (Photo courtesy Ozarks First)

Silver Dollar City opened its doors Friday to park guests after closing Thursday due to a fire that caused a park-wide evacuation.

Authorities are still working to find the reason behind the fire that burned multiple structures including Heartland Home Furnishings to Flossie’s Fried Fancies in the lower western portion of the park.

Jeff Ussery is the Vice President of Operations for Silver Dollar City Attractions. He said the park is happy no one was hurt, but many employees are devastated over some of the structural damages.

“You know for a lot of our employees this hurts because those aren’t just buildings to us. It indeed is part of our life. This place, Silver Dollar City is so special to not only our guests, but our hosts who work here year after year,” said Ussery. “These buildings are more than just wood, they’re more than lumber and steel, they mean something to them. So while we’re so fortunate and so happy this turned out the way it did, and we’re looking forward to what we can do here next.”

Any park guest that had a ticket purchased for November 18th, will be able to receive a free park ticket from now through the rest of the year according to Silver Dollar City officials. Jason Hypes and his family used theirs on Friday after a bit of misfortune on their vacation in the Ozarks.

“We had a car break down on the way here,” Hypes said. “We had to spend the night in a hotel. We got the car fixed, and then what else happened? Yea then why we’re in the hotel there’s an earthquake. That woke us up at night, and then we got here and got ready to come to the park yesterday, and then we find out there’s a fire and the park was closed.”

Silver Dollar City has had crews working on the clean-up since Thursday. The area that suffered damages is blocked off to park guests by a large wooden fence decorated with Christmas lights. Officials say they are making signs for the fence to thank the local first responders who helped keep guests and the park safe during the fire.