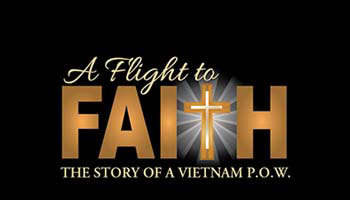 POINT LOOKOUT, MO. — Starting Oct. 4, College of the Ozarks will present “A Flight to Faith: The Story of a Vietnam P.O.W.” This true story chronicles the journey of an American hero, Colonel John Clark. The play is produced and performed by students at College of the Ozarks.

The showing of a patriotic play is a fall tradition at College of the Ozarks. Performances take place in the Royal Oak Forum and are free and open to the public. Tickets are not required; seating is first-come, first-served. The College will offer an area appreciation for the first performance of the season on Oct. 4 at 2 p.m. The first 100 in attendance at these performances will receive a special, student-made gift from the College.

Mark Young, professor of theatre, along with several students derived the play from the books, “Vietnam 101: A Class Like No Other,” written by former President Jerry C. Davis and “The Eagle Hunts” by Colonel John Clark. The students who attributed to the play are:  senior Susie Johnson, music theatre major; 2022 graduate Nicholas Sutton; 2022 graduate Izzy Sutton; and junior Elijah Wolfard, biblical and theological Christian studies.

For 2,176 days, Colonel John Clark was held captive in the infamous “Hanoi Hilton” as a P.O.W. during the Vietnam War. He endured starvation, a deadly sickness, and mental and physical torture at the hands of the enemy. To his family, he was reported MIA and presumed dead.

Performances will take place in The Keeter Center’s Royal Oak Forum. The play’s duration is approximately one hour and 20 minutes.

Show dates for the 2 p.m. performances:

Show dates for the 3 p.m. performances:

Show dates for the 7 p.m. performances: