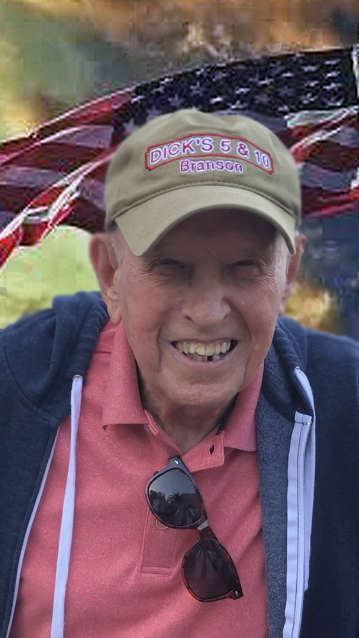 Richard Elroy Justus, age 92, of Blue Eye, Missouri, passed away with family by his side on December 14, 2021. He entered this life on July 8, 1929, in Tillman County, Oklahoma, the son of Robert Lee and Lettie (Bennett) Justus.

Richard proudly served our country in the United States Marine Corps. He was a life-long member of the Church of Christ. Having been a general contractor throughout his working life in California, Richard was a skilled craftsman who loved his work. His skills allowed him to build homes and projects for famous stars. Richard enjoyed fishing, camping, attending car shows, and his hot toddy! At home, he enjoyed working on puzzles, the view of Table Rock Lake & all the animals, but especially the bunny rabbits. Most of all, he loved all of his family and their treasured visits. The family will cherish these moments, that have now become memories.

Kathryn Schoch; and several great-grandchildren; and much loved nieces, nephews and other family members.

A celebration of life will be planned in the Spring of 2022 in California. Memorial contributions in Richard’s name may be made to the Veteran’s Memorial Garden in Branson, Missouri. (www.veteransmemorialgarden.com) Arrangements and cremation are under the direction of Cremations of the Ozarks. To leave an online condolence, please visit www.cremationsoftheozarks.com.