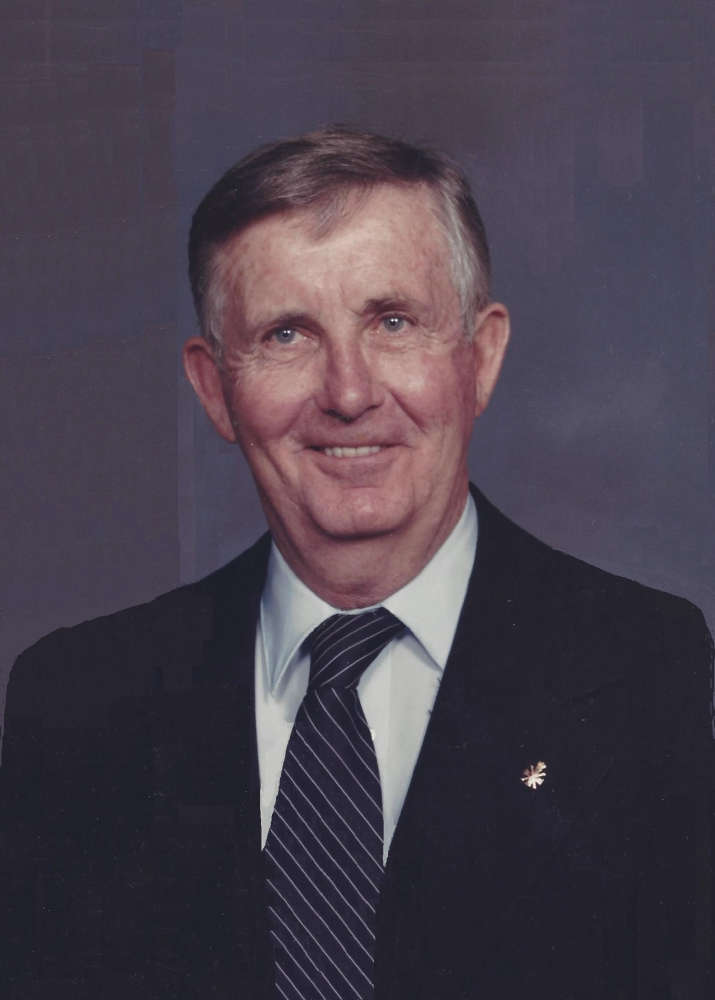 Everette Leonidas Gloyd, age 101, passed away on Saturday, January 1, 2022 and will be deeply missed by his family and friends. Mr. Gloyd was born on November 26, 1920 in Branson, Missouri to the parents of James Emanuel Gloyd and Mary Ellen Haggard Gloyd. Everette Gloyd was united in marriage to Rebecca Jane Russell Gloyd on August 24, 1940 at the Methodist Parsonage in Green Forest, Arkansas. The Gloyds were married 68 years before her passing in 2008.

The Gloyds were very active in the Branson community-both owning businesses and serving the community through various organizations.  Mr. Gloyd was a member of the First Christian Church.  Before WWII, Mr. Gloyd worked for Madry Lumber Company and also for Shade Tree Company.  He and his brother Archie owned Gloyd Brothers Lumber Mill until the tooling was needed for the war effort and he left to fight in Europe from 1944 to 1946.  His basic training was at Camp Robinson in Little Rock, Arkansas.  Mr. Gloyd was sent overseas in December 1944 and fought in the Battle of the Bulge, the Rhineland, and Central Europe campaigns.  He was a sharp-shooter and was often sent in behind enemy lines to scout.  His training as a lineman, his agility, and only by the grace of God helped him survive the rigors of war.  As a replacement soldier, he was attached to many units, but ultimately was discharged with the 75th Division, 291st Infantry, Company L and was awarded two bronze stars.

For more than 30 years, Everette managed Bonsteel Lumber Yard in Branson.  He also served as Taney County Assessor and was a developer.  In addition to running businesses, he served as a volunteer fireman and a municipal judge.  Often times, he financed businesses by extending credit for materials when the banks were uncomfortable to do so.  As a result, some well-known businesses have thrived due to his entrepreneurial spirit and willingness to work with them.  Everette and Becky often made silent contributions to the community to further various efforts.  The materials and the land for the adoration scene was one of many examples.

The Gloyd’s involvement in the Masonic Lodge and related organizations spans nearly eight decades.  In 1978, Everette Gloyd was Grand Master of the State of Missouri.  His primary affiliation was with Branson #587 AF & AM.  He held offices with Grand Commandery of Knights Templar (York Rite), the Grand Council of Cryptic Masons, the Grand Chapter of Royal Arch Masons, and the Red Cross of Constantine.  He was also a member of the Order of Eastern Star and the International Shriners.   Both enjoyed serving on the boards for the youth – DeMolay and the International Order of Rainbow for Girls.  The Eye Foundation, the Shriners Hospital, and the local Children’s Christmas fundraising efforts were important to the Gloyds.

Everette was well-known for his love of music which began at an early age learning the violin/fiddle from his very talented mother.  Through the years, he also played guitar, mandolin, bass, and banjo and was a collector of instruments.  Although he was known to play locally, for many years, their home was open weekly to an evening of music and that tradition has continued at Mount Grove School House.  He always encouraged his family and friends to pick up an instrument or learn something new. Most importantly, he wanted them to be happy.

Everette spent 75 years in Branson, Missouri before moving to Mid-Missouri to be closer to his immediate family.

Funeral arrangements are under the direction of the Snapp-Bearden Funeral Home and Crematory in Branson, Missouri.  Visitation will be held on Friday, January 14, 2022 from 1:30 PM until 2:30 PM.  The memorial service will be held at 2:30 PM. Branson Lodge #587 will honor Mr. Gloyd. Immediately following, graveside services with a military honor guard will be held in the Veterans Section at Ozarks Memorial Park Cemetery.   Afterward, a Celebration of Life will be hosted at “Weddings at the Homestead”.  The family wishes memorial contributions to be made to the Veterans Clinic – University of MO School of Law or the Shriners Hospital.